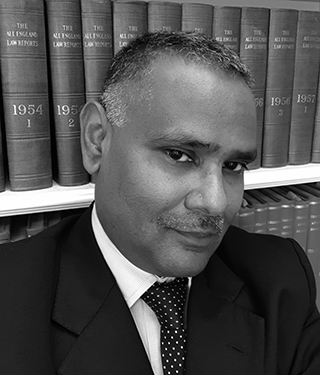 A leading counsel in Crime for London, he is a member of the Criminal Bar Association, Fellow of the Chartered Institute of Arbitrators, Chartered Society of Forensic Sciences [affiliate], and Civil Mediation Council. He is a CMC Registered Civil and Commercial Mediator. He is a Member of the Panel of Advocates at the International Criminal Court. He is accredited by the Bar Council to provide Public Access Services. He has extensive experience in defending and prosecuting in the most serious criminal offences. He is also an Advocate & Solicitor of the High Court of Malaya.

Steven Perian was appointed King’s Counsel in 2016 having previously been appointed Junior Counsel to the Crown (Attorney General’s Panel of Prosecution Advocates – List A (London and South Eastern Circuit). He was appointed at the highest level (Level 4) on the Advocates Panel List and a (Level 4) prosecutor on the Fraud Panel and Rape List.

In 2013 and again in 2014 Steven was named ‘Forensic Law Barrister of the Year’ by Acquisition International.

The Legal 500 has said of Steven … ‘He is able to get to the core of the case’ . ‘His practice includes a range of challenging homicide cases’ .‘Comfortable prosecuting and defending violent and sexual crime.’

Steven Perian KC…”He has an analytical mind and an encyclopaedic knowledge of the law.”

Steven delivered training to CPS [NBCPA members] in November and December 2019 on the law relating to bad character. https://www.nbcpa.org.uk/2019/12/nbcpa-law-discovery-sessions-nov-and-dec-2019/

R -v- Lee Dowman & others – the murder of Daniel Adger in South Ockendon – the defendant was acquitted of murder.

R-v- Kevin Paddick – the murder of Danny Myers in Clacton.

R-v- Calvin Tudor & others – Eight defendants charged with the murder of Che-Labastide Wellington who was stabbed in the heart as he left a party.

R-v-Joshua Asante & others – JA charged with the murder and manslaughter of David Darko. The case concerned the stabbing to death of DDD in a park in South Norwood after a drug deal went wrong. The co-defendant was found guilty of DD’s murder.

R v Michael Smith & others – Conspiracy to commit murder arising from a shooting in Hertfordshire. The case occupied the court for 10 weeks with Smith being the only defendant acquitted.

R v Saana Ibrahim & others – Ibrahim had been accused of luring a young man to a group who waited to stab the victim to death.

R v Gill – man charged with killing a pedestrian with a single punch to the head following an altercation over the defendant’s friend cycling on the pavement.

R v Koc man charged with a double murder following a two-week period of attacks on victims in a London woodland in early 2011.

R v Davina Smith mother who drove a stolen car whilst being unfit through drugs which resulted in the tragic death of her two young children and two friends.

R v Williams et al – Murder and Child Cruelty case where the victim was the 5-year-old daughter of Mr Williams.

R v Hylton & 9 others – the murder of Danny O’Shea – the only instructed Leading Junior in the case. The other defendants were represented by Kings Counsel. The defendant was acquitted.

Arson including with intent to endanger lives.

Steven has appeared on behalf of the Prosecution in a number of interesting cases:

The case involved the death of a 6 week old baby at the hands of the father of the child. After a 4 week trial the jury convicted the accused of murder before the trial Judge, Mr Justice Nicklin. The child died of a fractured skull and a bleed on the brain and was found to have suffered many other serious injuries.

Counsel was instructed by the Crown Prosecution Service, Brighton.

Further details of the case can be found at https://www.bbc.co.uk/news/uk-england-kent-50156833

R v Anis Anderson and Carla Callum – The murder of a 20-year-old drug dealer at London, Colney in St Albans

R v Broster and others.

Operation Arad – A police investigation into large scale Internet Shopping Fraud. The fraud was valued in excess of £2 million and perpetrated by an international Romanian Organised Crime group.

Conspiracy to obtain money transfer and property by deception from Price Waterhouse Cooper.

Conspiracy to defraud U.K. financial institutions (US Treasury Bonds Worth $US 55 billion).

Handling of £490 Million of Stock Bonds.

Computer related crimes – in particular the use of computers and Internet in order to defraud.

R v O and A, Juvenile defendants causing grievous bodily harm to a Muslim man who was on his way for Friday prayers to a mosque

R v Selvarajah and others, Tamil gang members fighting with each other.

Member of the Panel of Advocates at the International Criminal Court