The 31 year old, Fazal Sidiqkhil has been jailed after sexually abusing 4 young boys aged between 11 and 16. Sidiqkhil would give money to the young boys to gain their trust before performing sexual acts on them. On the 24th January 2021, Sidiqkhil was charged with over 30 offences, including rape, after one of the young boys came forward and contacted West Midlands Police. After pleading not guilty, Sidiqkhil’s case was then heard at Birmingham Crown Court for a 5 week trial, prosecuted by Grace Ong leading Alex Kettle-Williams. A jury found Sidiqkhil guilty and he was sentenced on the 14th July to just under 30 years. Detective Sargent Crossfield said: “I cannot underestimate the bravery and resilience of these young boys in coming forward and reliving what they went through. Sidiqkhil denied all the charges so they also had to go through the ordeal of a trial.”

Matthew and Russell are both extremely experienced practitioners, in London and on the Western Circuit, who continue to be in demand in their traditional heartland and in the West Midlands, Chambers has grown. They take over from Sally Howes QC.

In a letter to all barrister and staff at 2KBW, Matthew and Russell said: –

“We would like to thank Sally Howes QC for her leadership of Chambers. She became Head on William Mousley QC’s elevation to the Circuit Bench, and at the start of the Covid-19 pandemic…she has provided great guidance and support both during the unsettling times of lockdowns and thereafter. As a Senior Queen’s Counsel, and a recognised leader in her fields, we can all be very grateful that she took the helm at such a difficult time. She has decided now to stand down as Head of Chambers, but remains firmly committed to supporting the leadership, and Members of Chambers, wherever she can. She will remain a busy leading practitioner in her fields of expertise. We are most grateful to her.”

The letter also stressed Matthew and Russell’s commitment to 2KBW’s common law roots – balancing the criminal work it is renowned for both prosecuting and defending with its extensive civil, family, immigration and other work.

Originally a London, and Western Circuit based chambers, 2KBW, which has an annexe in Portsmouth, now sends its 74 barristers to a wide range of locations in England. It merged with 1 Inner Temple Lane in 2017, to offer a wide range of specialities. 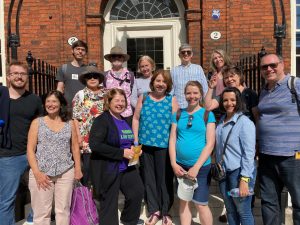