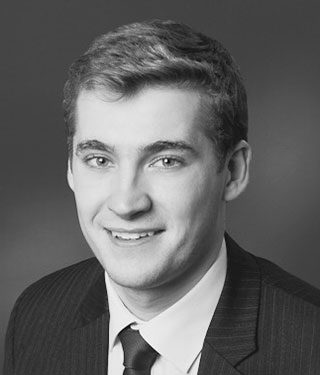 James joined chambers in July 2017 following the successful completion of his pupillage.  James has been commended for his personable style; engaging in court and with clients alike, he translates complex legal matters into comprehensible advice.

“Counsel was excellent in terms of communication and case management at Court, and the client was delighted with the outcome.”

“We are really impressed with his work and his ability to stay on top of cases.”

During pupillage, James gained experience in civil, crime, family and immigration hearings, and has continued to expand his practice in civil and family law. Before joining chambers, James worked as a county court advocate. He has since built on his extensive experience in the areas of landlord and tenant, mortgage repossessions, insolvency, contract, personal injury as well all manner of procedural hearings.

James acts for landlords and tenants in possession claims, claims for recovery of service charges, and deposit protection disputes.  James also advises and represents clients in other property matters including leasehold disputes, trespass, mortgage repossessions, boundary disputes and TOLATA claims.  James is regularly instructed in the Small Claims Track, Fast Track and Multi-Track for road traffic accidents, credit hire and holiday sickness claims, which include advising on quantum and drafting pleadings. James has also acted on appeals in the county court under its appellate jurisdiction.

Beyond property and personal injury matters, James has appeared in the County Court and High Court in insolvency and bankruptcy matters, and has a wealth of experience in general contract disputes, and issues of tortious liability.

James has experience across all areas of family law but is mostly instructed in financial remedy matters. James’ experience in property law makes him well-placed to advise on TOLATA disputes. He has represented clients from the commencement of proceedings and often achieves positive settlements at an early stage. Where this is not possible, he has appeared at final hearings involving a variety of property and pension disputes.

He has acted for all parties in pubic law proceedings at urgent, interim and final hearings. James has also acted for parents and the guardian in private law proceedings. He is available to act in applications for occupation and non-molestation orders.