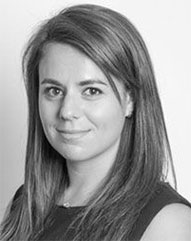 Hayley has been a tenant of Chambers since October 2017 following successful completion of her pupillage under the supervision of John Ward-Prowse and Russell Pyne. Hayley is noted for her thorough preparation and creative approach to legal problems and has been complimented for her personable style with both professional and lay clients alike, giving practical and robust advice in a calm and comprehensible way.

Hayley is authorised to accept instructions on a direct access basis.

Hayley has a busy practice in family law and is particularly attracted to the mercurial nature of family proceedings. She is regularly instructed on a broad range of matters including public and private law children proceedings, matrimonial finance and Family Law Act proceedings.

In public law, Hayley has represented local authorities and parents and has experience of matters featuring issues of emotional abuse, domestic violence, neglect and drug and alcohol dependencies.   Hayley spent time working in-house for a Local Authority, where she gained valuable experience acting for the Authority in a number of cases involving sexual abuse, special guardianship applications and emergency protection orders.

In private law, Hayley is regularly instructed to act for parents in Child Arrangement Order applications, leave to remove applications and applications for parental responsibility. Her exceptional client skills mean that she is accomplished at gaining the trust of clients and working with them to achieve the best possible outcome.

Hayley has a flourishing practice in matrimonial finance matters and has successfully represented husbands and wives at all stages of financial remedy proceedings. She always favours achieving a settlement which works for her clients but is not phased by voluminous documentation and detail.

Hayley regularly acts for both applicants and respondents to applications for Non-molestation Orders and Occupation Orders.

V v V (2019). Successfully represented a wife at FDR on a matter involving assets outside the jurisdiction.

S v S (2019). Successfully represented a wife at FDR securing an equal division of the family home despite the wife not having lived in or contributed to the property for a number of years.

Re S (2019). Successfully represented a mother in a non-accidental injury matter, who was found by the court not to have caused the injuries to her child and was removed from the pool of perpetrators.

Re H (2018) – represented the Mother following the Local Authority’s application for an interim care order where the care plan was to remove the child into foster care. Successfully negotiated for the Mother to be placed with the child in a residential foster home.

Re B (2018). Successfully represented a mother, who was opposing long-term foster care.  Managed to obtain therapeutic support for the family with a view to rehabilitation of the child back to the parents care.

B v D (2018). Represented a mother, who was responding to an application for an enforcement of a child arrangements order.  The application was dismissed following submissions that the order provided to mandatory obligation on the Mother and, therefore, could not be enforced.

Re T (2017) – represented a Local Authority in a chronic neglect case in respect of an application for a Care Order.

Re B (2017) – represented a Local Authority following an application by extended family members for a Special Guardianship Order.

Re P (2017) – represented the Respondent to an application for a Non-molestation Order and Occupation Order. Successfully negotiated cross-undertakings.

Hayley is regularly instructed on cases involving road traffic accidents, involving credit hire claims and personal injury claims both on the small claims track and the fast track. Hayley also acts for both landlords and tenants in possession claims and in contractual matters.

E v B (2019). Successfully represented a claimant in a claim for credit hire where the defence sought to strike out the claim due to the claimant’s non-compliance with a court direction for the service of evidence.

C v P (2019). Successfully negotiated a resolution for a claimant in a Protection from Harassment Act 1997 application.

I v M (2017) – represented a college in a claim for non-payment of tuition fees. Claim awarded in full.

S v P (2017) – represented a defendant to an application for a stay of execution of a judgment debt where the claimant had been previously found to be fundamentally dishonest. Application dismissed.