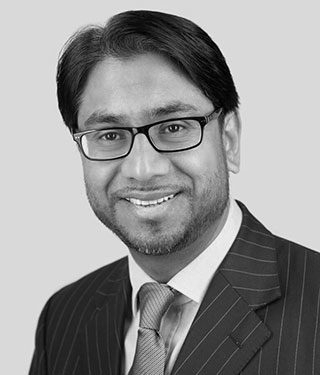 Gulam is an experienced criminal defence barrister who is regularly instructed to defend in high profile and serious cases; this includes murder, terrorism, fraud, drugs and firearms. Many of his cases have included an international or human rights angle.

Gulam came to bar with an LL.M in Commercial Law and experience within a busy solicitors firm. Gulam’s dedication to cases, strong advocacy and analytical ability have made him a first choice for both solicitors and direct access clients alike.

Over the years, Gulam has defended in some of the most high profile cases to feature in the media including the ‘Rachel Manning’ murder case, the attack on the Indian General responsible for Operation Blue Star, the case of AM, the first person to have been extradited from Afghanistan, as well as many others [see a list of notable cases below]. In addition to his criminal practice, Gulam has successfully defended landlords charged under the Housing Act and appeared before the GMC, Coroners Court and Tax Tribunal.

Gulam is currently instructed to defend in the Syrian Imam murder case, the ‘Boxer Cetin’ murder case, a large mortgage fraud where the defendant is a spiritual leader, a large VAT fraud, and a conspiracy to supply firearms.

Gulam is fluent in Bengali, Hindi and Urdu.

Gulam is a member of the Criminal Bar Association.

I instructed Gulam in a multi-handed prison escape case. I found Gulam hard working, easy to work with and tactically brilliant. The prosecution case was based on phone and cell site evidence which Gulam eloquently destroyed!
(Simon Kups, Cartwright King)

Gulam represented a co-defendant who was running a cut-throat defence against my client in a £130m money laundering case. I was so impressed with the way Gulam represented his client that I have since instructed Gulam in a number of serious cases.
(Arshad Ali, Ashmans Solicitors)

Dedicated and hardworking; always gets the best results for my clients.
(Shofna Begum, Stewart Begum Solicitors)